A Man and His Tweed

The night before Fashion Week began, I read an article in which the Financial Times’ style editor lamented the lack of a common lexicon when it comes to sustainability in style. She asked a variety of designers for their definitions and, of course, they varied greatly. Incidentally, the first show Dossier assigned me to cover was John Patrick Organic, a collection one might presume to be made of entirely organic fabrics. But one might be presumptuous.

There were, indeed, some pieces, like the turtleneck on the left, made from fabrics that were, well, conventionally organic. But the most interesting fabric was not organic–at least, not according to the federal regulation. My favorite pieces in the collection–high-waisted shorts and trousers and a riding jacket with peaked shoulders were made of something called Harris Tweed. 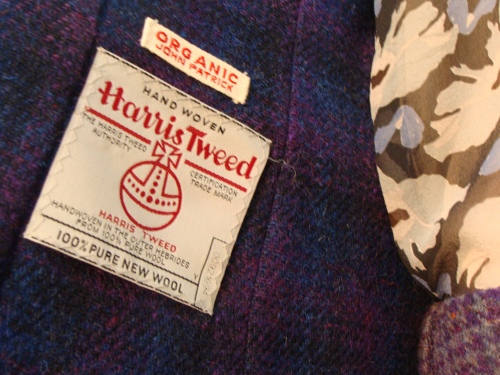 Just as John Patrick was beginning to tell me about it, a rather distinguished looking continental type strode into the show, donning  a great deal of tweed himself. John Patrick, flitting between photo opps and interviews, looked relieved to hand me off to an authority, and so I was introduced to Mr. Alan L. Bain, the Director of Harris Tweed Textiles:

Mr. Bain told me all about the Act of Parliament that protects the name of Harris Tweed, 100% sheep’s wool that must be spun, dyed and handwoven (at home!) by the islanders of the Outer Hebrides, off the west coast of Scotland. Each bolt is stamped with a Maltese cross and orb, the stamp of Harris Tweed–a coat of arms that John Patrick, incidentally, integrated into the arm of a coat:

“It’s like baking a cake,” Mr. Bain said. “You have a recipe of different percents of colors.” (I was partial to an orchid pink shade used in a pair of high-waisted shorts.) It’s a recipe the Scots have been using since the 1800s, for a natural, bio-degradable, and, dare I say, beautiful fabric. But my guess would be that it isn’t cheap, which might be why Harris Tweeds’ production is down to one quarter of what it was 15 years ago (400,000 meters per year vs. 1,600,000 in 1995). The Act of Parliament was taken up by Prince Charles and the wool lords (not to be confused with war lords–we’re not talking about Blood Tweed) to protect the traditional techniques of farming and fabric production. The girls from Vogue arrived while I was chatting with Mr. Bain. They loved the tweeds. J Crew has apparently taken up the fabric as well.

“But is it organic?” I asked Mr. Bain. Well, not exactly. Not the dyes, he said. There is one gent on the island, said Mr. Bain, doing organic, but they just didn’t have the demand yet. So, here’s a strictly defined fabric made of natural fibers using a 200-year old method that’s keeping a few Scottish farmers in business. It’s been in a slump, but might make a comeback if the right designers create demand.

So while it may seem a little dodgy to use the word “organic” as a brand name for a line in which all the fabrics are not organic in the strictest sense, it also seems it wouldn’t make sense to throw out the baby with the bath water. I agree with the Financial Times’ editor, that the fashion industry needs to set some solid, scientifically definable standards of sustainability to adhere to. But I also think we need to leave a little room for interpretation and let it develop, well, organically, to leave a little room in designers’ lexicons for fabrics like Harris Tweed.

From Backstage to Backcountry: Herding by Helicopter

As promised, I’m following up Fashion Week with some behind-the-scenes stories with you.

Today we’ll go from backstage NYC to backcountry NZ,  thanks to the wonders of video and one very generous helicopter pilot. Ready?

Last week, after Karen Walker‘s Fall 2010 show I snuck back to say hello and find out some details for Dossier. Specifically, I wanted to know about those shag-alicious sheepskin vests. Karen, like my brother-in-law Doug, happens to be Kiwi–which is to say, from New Zealand. Are the sheepskins Kiwi too? I wondered.

“They are!” exclaimed Karen. But she said they had a hell of a time finding just the right ones. “We had to go all the way to the south of the South Island,” she said. “The coldest part of the country.”

The coldest part of the country happens to be an area I know quite well. You may think I’m just some crazy city kid that runs around garment factories and fashion shows wearing overalls ironically, but I’ve actually herded sheep with the best of the best on New Zealand’s wild South Island.

After I left Edun, and before I went to journalism school, I took some time off down on the farm with my sister and her husband, Doug, who herds New Zealand Merinos–just the sort of sheep that shagged up Karen Walker’s collection. Usually we can get the job done with trucks, whistles and well-trained dogs, but sometimes we actually need to hop in a helicopter, depending on where those sheepies are grazing. 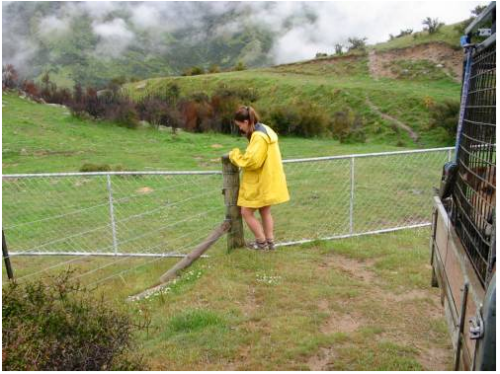 You might think someone’s stolen my password, but I’m totally serious. Here’s some original footage from my morning heli-herding with Doug’s next door neighbor. We flew from his farm, way beyond the timberline, and chased (or “mustered” in Kiwi terms) the herd back down to greener pastures.

Like many other luxury labels, the knitwear brand Pringle of Scotland is using video to convey their message–though the movie getting all the attention might not be the one you would might expect.

You, like me, may have read about artist Ryan McGinley directing the awesome and terrifying Tilda Swinton in a short film to feature Pringle’s collection. While lovely, and very evocative of the brand’s inspirations (much like Steven Alan’s Spring 2010 movie), it’s artist David Shrigley‘s cartoon tracing the story of a sweater that’s getting all the love on YouTube. Shrigley: 42,500, McGinley: 11,900. Maybe it’s just cause the cartoon is totally charming, or maybe…just maybe, customers are more interested in materials than in marketing?

I wish I could make this a closet case study, by showing you my awesomest Pringle sweater, but I haven’t got one. There is, however, an incredible intarsia number from the ’80’s currently haunting me from the sale rack at Portia and Manny. And that little cartoon only makes me want it more.

Thanks to the ever-on-top-of-it Katharine Zarrella for pointing it out.