For most bloggers, linking to last week’s story is sort of like wearing last season’s clothes. But let’s be honest, I do wear last season’s clothes, and Rebecca Mead’s ramble through Brunello Cucinelli‘s Umbrian kingdom of cashmere, in the March 29 New Yorker is already a classic, much like Cucinelli’s casually elegant clothing.

The philosopher-king of cashmere’s unusual approach to his business–applying his Greco-Roman values to his home, his office, his sample factories and even establishing a small surrounding city in his vision, made me wonder why we don’t see this more often with American designers, so keen on ever-lucrative lifestyle brand. So why not build lifestyles?

Sure, Betsey Johnson had Betseyville and Ralph Lauren has Telluride‘s Double RL Ranch (and Round Hill in Montego Bay and the beach house in Montauk and the Bedford estate), but these holiday homes and resorts are available to but a few privileged guests.

As long as Ralph Lauren is branding bed sheets, house-paint and 1500 cattle, why not brand his own supply chain, and maybe even build a little colony around it? I’m serious. Imagine if American designers established enclaves for producing high-end capsule collections where the entire supply chain–and not just the look–aligned with their values. Now that would build a brand.

Here are my proposals for a few I’d like to visit.

Donna Karan’s Pure Peru: Donna Karan could establish a small factory in the mountains outside Máncora, Peru, to produce her existing DKNY Pure line. She could use naturally colored organic Peruvian pima cotton to create heavenly cotton tees in the sandy beiges and whispery pinks she used for the collection in the ’90s.  Mead mentioned 90-minute lunch breaks at the Cucinelli factory–enough time for pasta, salad, grilled meat and wine (for less than five bucks in the cafeteria), followed by a nap. Maybe Karan’s macrobiotic chef could whip up meals in an outdoor kitchen, and factory workers could re-energize with afternoon meditation breaks. The designer could host guests for retreats at Samana Chakra, a little beachfront spot I visited after a production trip for Edun a while back. Pure Peru? Sign me up, the shirts and the retreat.

Ralph Lauren Red, White and Blue Label: For his All-American collection, Lauren could make it…wait for it…all American. He could bring down some of the beef cattle from Double RL and start a little cotton farm in South Carolina. Since organic cotton can only be harvested once per year (as opposed to conventional cotton’s three yearly harvests) Lauren could rotate his crops with grain to feed the cattle in the winter. Naturally, they would be grass-fed the rest of the year. Lauren could find some  old equipment from the area’s historic mills and make fabrics to send to factories in nearby Surry County, NC, a community that’s been hit especially hard by job losses in the textile sector. (BLS predicts the job market will lose 71,500 sewing machine operators between 2008 and 2018.) He could follow Steven Alan‘s lead and resurrect the old-school Made in the USA tag that’s sewn into some of Alan’s signature pieces.

Ms. Mead wrote of Cucinelli’s commitment to his country, where 100% of his collection is manufactured. When the financial crisis hit, she said, Saks showed their support for Cucinelli by dedicating its windows to his brand and hosting an event with the cuisine of his Umbrian home. What could be more American than an organic cotton dress farmed from land that helped raise a (branded) burger in the off-season? I’ll have one of each, and come down for the cattle round-up.

Patagonia’s Camp Cleanest Line: Okay, I’m cheating, because The Cleanest Line is already the brand’s blog, but the double entendre is too good. As you can read in his book, Patagonia founder Yvon Chouinard applies his philosophy–which involves a great respect for the outdoors and his employees, and providing the time for the latter to enjoy the former–to his business offices in Ventura, California. Camp Cleanest Line could appeal to Pata-groupies who not only love the clothing and want to observe this management technique in action, but also want to take a break to surf Rincon if conditions are conducive. Visitors could participate in a beach clean-up like the one the Patagonia employees recently did, and the trash they collect could be recycled into fleece. Patagonia produces largely in China, but they take the dramatic step of making their factory list public, so any camper who really wanted to follow their soda bottles overseas could. Come to think of it, I’d say Patagonia’s sort of already established a lifestyle brand, which might be why I’m sitting here in the garment district longing for, well, that Patagonia lifestyle.

Like many other luxury labels, the knitwear brand Pringle of Scotland is using video to convey their message–though the movie getting all the attention might not be the one you would might expect.

You, like me, may have read about artist Ryan McGinley directing the awesome and terrifying Tilda Swinton in a short film to feature Pringle’s collection. While lovely, and very evocative of the brand’s inspirations (much like Steven Alan’s Spring 2010 movie), it’s artist David Shrigley‘s cartoon tracing the story of a sweater that’s getting all the love on YouTube. Shrigley: 42,500, McGinley: 11,900. Maybe it’s just cause the cartoon is totally charming, or maybe…just maybe, customers are more interested in materials than in marketing?

I wish I could make this a closet case study, by showing you my awesomest Pringle sweater, but I haven’t got one. There is, however, an incredible intarsia number from the ’80’s currently haunting me from the sale rack at Portia and Manny. And that little cartoon only makes me want it more.

Thanks to the ever-on-top-of-it Katharine Zarrella for pointing it out.

Yesterday, at the end of a really beautiful fall Sunday, my friend Erin snapped this photo with her phone. I liked it. It captured a contented moment with a full glass of wine and reddening leaves. I posted it to my Facebook account when I got home, which is something I don’t usually do. Then this morning, I realized a reason not to…

When I went to get dressed, I immediately reached for that same striped shirt (Steven Alan, made in USA, cut long and lean–his sample sale starts Thursday, by the way). Maybe I was hoping some of that Sunday vibe would seep into my week, and in any case, I got dressed quite late yesterday and Erin was the only one who saw me in that shirt. But then I remembered the Facebook photo, and briefly reconsidered my re-run.

How many people really look at those pictures? Would anyone notice? I know at least one person who will. Kristen Joy Watts: a Facebook and fashion-savvy photojournalist who has previously noted my tendency to keep favorites on a (very) short cycle. I’ll likely see her later at the CUNY Journalism School.

But I’m taking a stand, I’m not changing out of this shirt. Furthermore, I’m announcing to you that yes, I sometimes love wearing the same thing two days in a row. (I’ve noticed lots of fashion designers have this tendency too. Sometimes thinking about clothes all the time can suppress the desire to dress.)

I have a friend with a nightly TV show who writes down what he wears to ensure he doesn’t recycle the same outfits within two weeks. Can you imagine? Screw it. I’m embracing the re-run.

Tagged as sample, sample sale, steven alan, what to wear?

I know I’m the consumer here, but sometimes I find myself completely consumed by the process. I’ll give you an example: jeans. Finding the perfect pair is no new obsession of mine. Actually, the first article I ever published was devoted to the topic. To me, jeans are very personal, and because they’re the mainstay of many an outfit, I’ve got to feel absolutely comfortable in them. And I don’t just mean that the fabric feels good against my skin, though that’s important too. I’ve got to feel like they look good. But let’s be honest, there are enough articles devoted to that topic.

What concerns me today is the question of durability.

Exhibit A: Loomstate jeans purchased at Steven Alan in the fall/winter of 2005

Jeans, in my mind, are sort of like the Golden Retriever of one’s wardrobe. They should be loyal, comfortable, handsome, tough, and love you unconditionally. (Some fortunate souls may have even found these qualities in a mate, but let’s not lose focus.)

I favor clean dark jeans, with no “designer” stitching on the back pockets and no pre-manufactured crease-lines on the front (in the business they call those “whiskers”). That’s what I had in mind when I purchased the above pictured Loomstate jeans a few years ago. I had been searching far and wide for a dark subtly bootcut pair and settled on these–partially because I liked what I had read about Rogan Gregory, the company’s co-founder, and their use of organic cotton. This was before I worked for Rogan at Edun and shared an office with the lovable folks at Loomstate in 2006, and it was also before Steven Alan was my friend–full disclosure here, folks.

Believe it or not, those babies were once a uniform dark indigo, sort of like this pair. All those whiskers were hard-earned, as were the rips in the knees…and these in the crotch. (If anyone knows a more attractive word for crotch, I’d love to learn it. Leave a comment.)

Although I would have preferred that they last an eternity without ripping, I was sort of okay with the way they wore. I’m hard on my clothes, especially shoes, jeans, and bags. This is New York, folks. And when I’m not here, I often find myself on farms, and the jeans go there too. 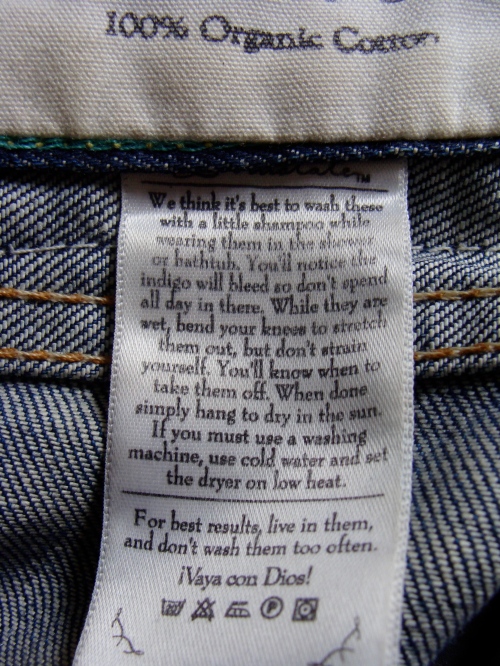 The denim got really soft, and they faded and broke in in such a way that some people pay extra for. So, for about $168 at a local retailer I got a pair of organic cotton jeans, made in the U.S.A. (of imported fabric–more on this later) that stayed dark and a little dressier for about a year before they began to decompose into the very casual pair you see today. I’ll have to get that latest rip in the knee patched if I’m going to keep them going through the winter, but there’s a question here about when to let go. Maybe when the patches outweigh the original pants, it’s time.

This was only Chapter 1 in a long denim diary. When these jeans ceased to fill my dark denim requirement, I set out searching for another pair. More to come.

Tagged as cotton, denim, durability, jeans, loomstate, made in the u.s.a., organic, steven alan, what to wear?